There is a magical atmosphere, in South Italy, when the shepherds come down from the mountains to cheer children and adults, living in city districts, with the sweet and harmonious sound of their faboulous bagpipes called “zampogne”. Especially around the season of Advent, when decorations and Christmas lights embellish the streets, creating a suggestive ambience, the shepherds, known as “zampognari” (zampogna players), entertain people with their authentic performances. Playing the “zampogna”, accompanied by a “ciaramella” flute (shawm), and sometimes singing lyrics in a duet or reading a pastoral hymn, they present the preserved musical forms and expressions of the original South Italy folklore. Although there are rapid changes in local economy and globalization is showing its effects also on local cultures, those shepherds have managed to maintain a culture which is considered to represent the true spirit of South Italy, manifested through folk music and its most typical instrument: the “zampogna”.

But what exactly is the “zampogna” and where does it come from? It is a wind instrument made of a bagpipe with drones and chanters, which produces a faboulous melody. It seems to correspond to “the pipe which twiters sweetly” mentioned by Virgil in one of his poems, written during the Roman time. Its sound, which seems to me to be reproducing that of a flock of goats and sheep bleating together, is vibrant, joyful and so harmonious that it resembles a symphonic composition.

Its origins are uncertain but it seems that the name comes from the Aramaic word sum·pon·yah′ (which sounds like the italian word “zampogna”) reported, for the first time, in the book of Daniel (around 500 b.C.) and it suggests a Babylonian musical instrument. Such tool was discovered by archaeologists at Ur, the town of Abraham in Sumeria, and scholars consider it as a forerunner of the modern bagpipe. Following the chain of development of the bagpipe, we might say that from Sumeria, those instruments were introduced in Egypt, then in Phrygia and Lydia and from here to Phoenicia, then Greece and Rome. Examples of single/double reed pipes have been found, in fact, in ancient Egypt (Alexandria), in Greece as well as in Magna Grecia, which corresponds to South Italy. Presumably it was the Greek population, that inhabited the Southern regions of Italy, the one that introduced the use of “zampogna” in those areas. In fact, the word “zampogna” was used by Theocritus (who lived in Sicily, part of the Magna Grecia, during the 4th century b.C.) in a picture poem, “The bagpipe”, preserved in the collection of “technopaegnia”, the art of ‘shaped‘ poems (poetry where the visual elements are so important that they seem to have a spiritual or magical vigor).

A legend relative to the foundation of the town of Panni, in the province of Foggia (Apulia) by Daunus (the son of the king of Arcadia, Lycaon), who settled in an area now called Daunia, close to the Appennine mountains, says that Daunus was accompanied by a contingent of Illyrians/Pelasgians around the second millennium b.C. and that they were using the ”askaulos” a wind instrument, that gave the aulete (the aulos player) the possibility to play without breath-pauses. Many askaulos played together formed a symphonia and the greek word συμφωνία (symphonia), meaning “agreement or concord of sound” might also be the root of the word “zampogna”, which produces, in effect, a harmony of sounds. 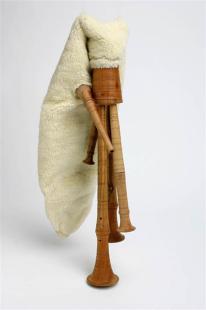 A few askaulos dating back to the Neolithic period (5000 b.C.) were found in Thessaly and they were made of two or more wooden pipes or reeds which were fitted onto a leather bag, usually the entire skin of a goat or a sheep, called uter (from which the English word uterus), which was used as an air reservoir that inflated when the player blew through a double drone which had a non-return leather valve. According to Greek mithology, however, the practice of the bagpipe was introduced to please the goddess Athena, who first created the double reed pipe (aulos), but complained because men were making a very ugly face when blowing that particular instrument, due to the cheek distortion when keeping the air inside the mouth for a long time. So, to avoid “the reproach of Athena” during those festivities when music needed to be continuous, the Greeks started the practice of applaying a bag to reed pipes, in order to make lengthy periods of playing easier. They created then the bagpipe known as the “askaulos”. It is reported that Aristophane (who lived during the V century b.C.) said that originally the “askaule(o)s” were also made of a dog skin. In fact he wrote ”…You pipers who are here from Thebes, with bone pipes, blow the posterior of a dog…”. It is suggested that originally the bags were produced with the skin of animals who frequented the villages, or those who were usually going along with the shepherds. Sometimes, in fact, the bags were made with the skin of dead goats or sheep, who had been, for a long time, the only friends of shepherds, and their skin when inflated and producing the sound, seemed to bring the animal alive. The Romans, who soon became familiar with the bagpipe, called it “tibia utricularis” and they used it during wars as the sound of it frightened the horses of their enemies. This utricularis was even used, in the first century A. D., by emperor Nero, who kept the bag under his armpit, in an attempt to please Athena, as reported by Dio Chrysdstom, a Greek orator, writer and philosopher of the first century. The Romans introduced the “zampogna” in the Roman colonies and, probably, in Britain too. In fact in this country the bagpipe became soon widespread (although a few british coins found during archaeological excavations prove that the bagpipes were prior to the arrival of the Romans). The “zampogna” was also used as an army instrument in many countries, during wars, but it is its use as an amusing instrument which made it very popular.

During the medieval age, while spreading all over the world and assuming different names, the “zampogna” became the most traditional music instrument in Southern Italy. In fact, it was used during festivities, religious manifestations and processions, weddings, friends’ gatherings, feasts and parties. The shepherds, during the “transhumance”, the seasonal movement of livestock between mountain and lowland pastures, used to bring the “zampogna” with them to play it while taking care of the herds grazing. Most of the time the “zampogna” was the only “company” that shepherds had during those periods when, all alone, they had to spend their time looking at flocks. The sound of the “zampogna” comforted them and made them feel at home. Most of the time they made their own “zampogna” using the material available on the mountains and they joined contests with other “zampognari” in order to exercise before going back to the villages where, in a bid to earn extra income, they used to go from house to house playing and singing pastoral hyms in the squares and the streets or serenading private homes. It was during the medieval age that the famous “presepio” practice started to be a custom, approaching the time of Advent and many shepherds where requested to perform in front of the statue of the Virgin Mary or before a “presepio”, which represented the Nativity scene. It was believed, indeed, that the shepherds had inherited the practice of singing and playing from the Angels that sung the first Carol when Christ was born. Those shepherds became then minstrels, poets and singers and they started grouping together so that while a few were performing lyrics, the others were playing delightful melodies continuosly. 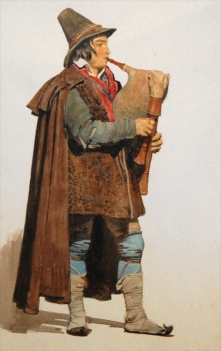 During the Renaissance, the “zampogna” was associated with bucolic poetry which represented beautiful rural landascapes, like the greek Arcadia, a sort of ideal place for poets and the mythological home of Pan, the god of shepherds, flocks and rustic music, who is always represented in the company of people dancing, singing and playing flutes and double reed pipes. And “Arcadia” is also the title of a bucolic poem written by Jacopo Sannazzaro who presented the lyric poems as songs accompanied by the sound of “zampogne” which, according to the poet, “can give more pleasure than other instruments”. The “zampogna” was then considered a sophisticated tool, although of very simple origins.

At the beginning of the 17th century, while reading Luke’s Gospel in a chapel of the famous Saint Domenico Maggiore’s Church, in Naples, a Domenican Father, Alfonso, had a vision of the number nine written on the book and he interpreted that vision as a special, miracolous message, a sort of invitation to pray for nine consecutive days before Christmas. He called this practice a “Novena”, a sort of pray chanted rhythmically and accompanied by the music of the“zampogne”. A few years later Saint Alfonso Maria de Liguori wrote also a novena “Quando nascette o ninno” (when the baby was born) which is considered to be the famous Carol “You come down from the stars” that “zampognari” keep on playing from the 8th of December to the beginning of January when, on the 6th,, the Christmas festivities are closed by the “Epiphany” celebration. (https://www.youtube.com/watch?v=cW0h4UucGTI)

The “zampogna” has been a vital element of the peasantry economy for a long time, especially in the regions of Central-South Italy like Lazio, Low Marche, Abruzzo, Molise, Campania, Apulia, Basilicata, Calabria and Sicily.

The modern “zampogna” is still made more or less in the same way as its forerunner. As a matter of fact, it is made of a goat skin or simply of a plastic skin which resembles that of a goat, to which a blowpipe is attached. It has usually two chanters and two drones from which the air goes out propagating the sound. The chanters, which have seven finger holes cut down the length of the pipe, and an additional thumbhole, at the back, generate an octave of notes. The drones, which contain a reed each, produce a continuous sound of two different tones, the bass drone is tuned two octaves below the chanter while the tenor drone is only one octave below. The “zampogna” player (zampognaro) blows a hollow wooden socket, through which the air gets into the bag and, at the same time, he squeezes the bag, kept under his arm, in order to maintain constant air pressure which assures the continuous sound. The reeds or pipes are made of olive tree, boxwood timber or apricot and plum tree wood.

The “zampognari” dress in their ancestral suit made of knee lenght trousers, long socks, a leather jacket, a mantle and a cap. The shoes that they wear are usually the typical footwear of peasants and shepherds know as “cioce”, (from which the name Ciociaria, a large area in southern Lazio region), which are made of long leather straps that surround the legs up to the knee and a kind of sandal that ends with a long tip rounded upwards.

Nowadays the “zampogna” is living a sort of revival in all the South Italy regions as it is considered to be the physical manifestation of the ancient traditions that are particularly felt in this part of the country. A Museum of Zampogna has been created in the town of Scapoli (Molise Region) and many festivals are held at different locations during the year. Associations of pastori-zampognari (shepherd-bagpipe players) are organizing a lot of events where the “zampogna” is considered the most important music instrument.